Chief Procurement Officer – Really? Is it time to Rebrand that Office? 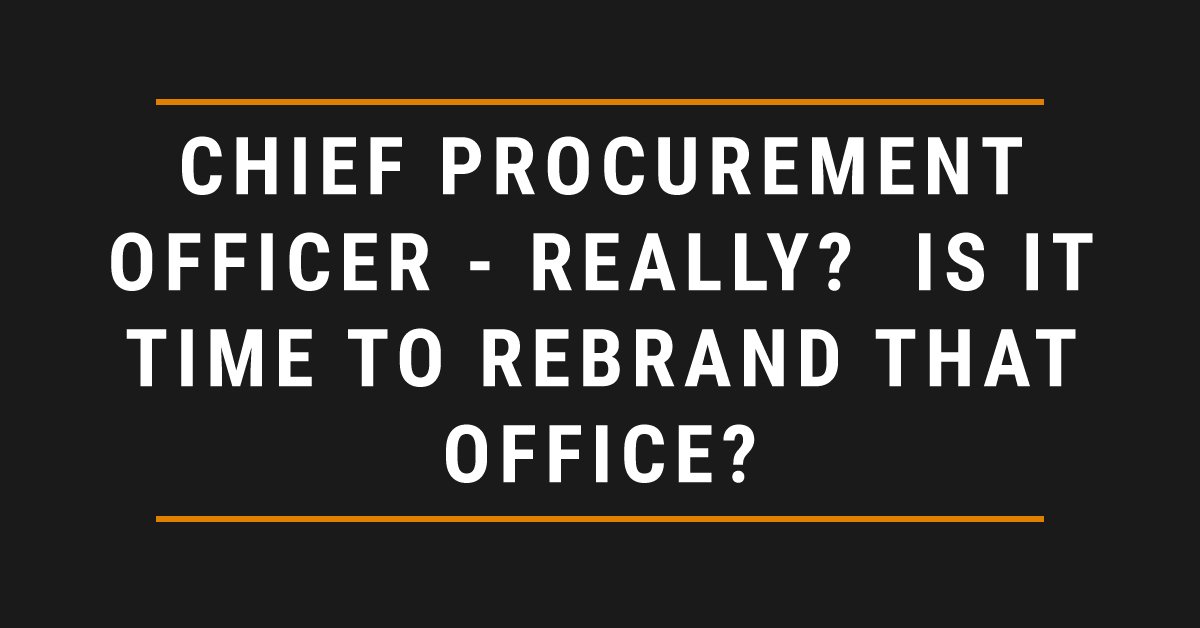 “What’s in a name? That which we call a rose/By any other name would smell as sweet.” – William Shakespeare (Romeo and Juliet)

I know I know I am going all Shakespeare on you here, but don’t worry, I won’t be donning tights anytime soon. However, there is a very good reason why I chose to start with this particular quote from one of “The Bards” greatest works: it speaks directly to the question of branding procurement, and more specifically, the Chief Procurement Officer or “CPO.”

Or to put it another way, crossing the divide between anonymity and substantive impact.

What Is in A Name Anyway?

While Shakespeare’s “rose” quote is a great metaphor in that it raises the question, what’s in a name, how relevant would it be if no one had ever heard of a rose? There would be no point of reference or context as the word “rose” would have no meaning.

The non-existent rose is an important point to keep in mind when it comes to an organization’s CPO.

According to a June 2018 article – which ironically herald’s the position of CPO as being the “dream job you have never heard of,” branding the unknown might be an exercise in futility if we do not go beyond the name. In short, our initial focus should be on doing a better job of highlighting the importance of procurement and the supply chain to showcase the role and importance of the CPO effectively.

The Nexus of All

In the above-referenced article, Charles Orton-Jones proclaims that “Procurement is the job that embraces all roles: tech whizz, ethical investigator, robotics pioneer, finesser of finance, and king of blockchain.”

He then goes on to list the multitude of areas in which procurement has a significant impact, including consumer demand for ethical sourcing and the influence that an organization’s procurement “methods” can have on its credit rating.

Think about that for a moment and then honestly ask the question; how many of us out there reading this article now are aware of our overall influence. Of equal interest, how many non-procurement people within our respective organizations are aware of our impact.

Looking at the results from the Deloitte 2018 survey (see above graphic), such awareness appears to be sporadic at best.

Only 24 percent see the procurement function as being “highly regarded” and contributing “significant strategic value.” Really!!!!

Given the breadth and importance of our impact, you would think that the majority of our co-workers would be eager to work with us. Instead, it looks as if 70 percent of the people within our organizations wonder what it is; we do during the day.

Going back to what’s in a name, I don’t think we need to brand the CPO position. Instead, we need to do a much better job of branding procurement’s overall value, starting with becoming more visible within our organizations.

When I say visible, I don’t mean cornering people in the hallways at every opportunity to scold them for their lack of awareness and appreciation for what we do.

What I am saying is that we need to be less timid in getting noticed, and willing to step into the limelight by taking a more active role in the general business of our companies. For example, we should get involved with special projects or join the steering committees that are responsible for determining the future direction of the organization. In short, we must stop being wallflowers and start being “blooming roses.”

2022 is a tipping point for suppliers | Interview with Dr. Elouise Epstein

For more than 20 years, Dr. Elouise Epstein has seen and done a great many things in the supply chain and sourcing world! Currently a partner in a...

Minority Supplier – What Is the Actual Definition?

There are many buzzwords and trending topics in procurement today, supplier diversity being among the top of the list. But is it just lip service?...

Non-Profit Procurement – The Woes and the Wins

In today’s procurement landscape, most of what you read covers issues impacting for-profit organizations while non-profit procurement tends to get...