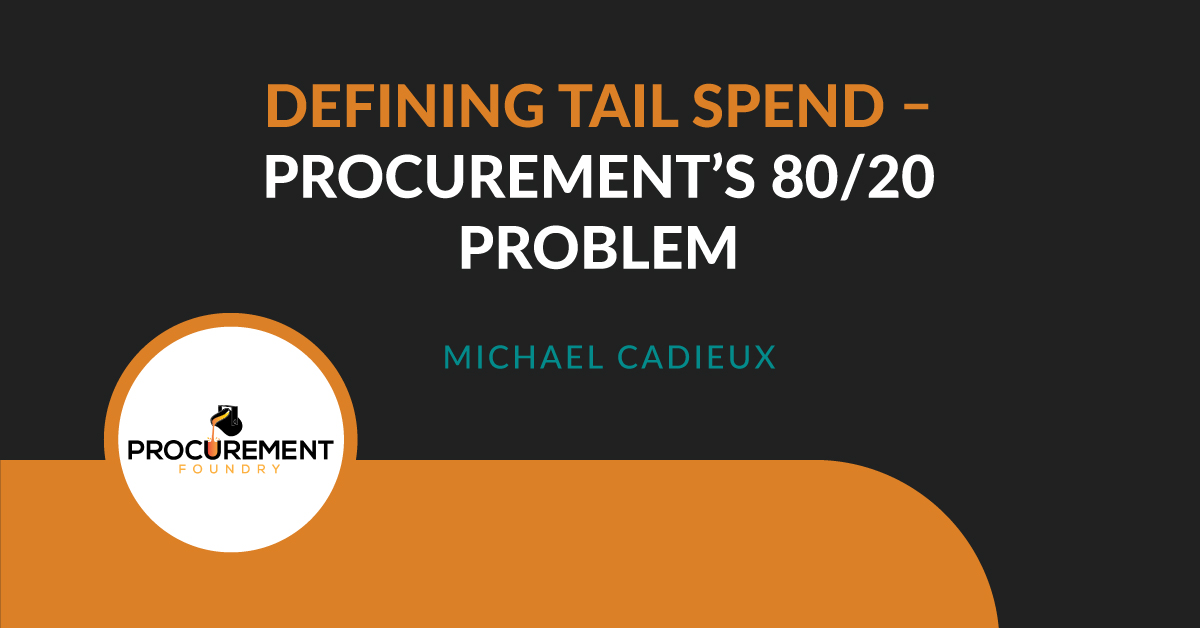 Nearly every organization in the world faces problems with tail spend. The following information is a resource for procurement professionals looking for ways to fix their tail spend issues. We simplify defining tail spend, explain why so many organizations struggle with it, and offer some helpful advice on what procurement can do about it.

Defining Tail Spend – What Is It?

You may have heard the term tossed about often, yet what does tail spend mean? What is it, exactly? As the title of this article alludes to (procurement’s 80/20 problem), tail spend occurs when 80 percent of purchases are made with 20 percent of an organization’s spend.

You may also hear about this as following the Pareto Principle, but, in a nutshell, tail spend includes the amount an organization spends on purchases that make up approximately 80% of transactions but cover only 20% of total spend. While tail spend can occur in any category, it is particularly common when discussing office products, print, packaging, business travel, business services, etc.

So, why is that such a big deal, and why does it cause concern for companies? The answer is simple—and alarming. When tail spend makes up such a large portion of purchases and such a small amount of the budget, it’s nearly impossible to track and presents a challenge for procurement. But we’ll get into all of that.

Since tail spend can encompass all sorts of things, it’s vital to define the tail spend of your organization, so you can pinpoint what’s happening in your company. Only then can you begin analyzing (and dissecting) the issue(s) to develop a solution that suits your needs and long-term goals.

So, what exactly does that analysis process entail? According to the professionals at PLANERGY, most organizations analyze tail spend by calculating the ratio of spend to suppliers, classifying tail spend as “all purchasing with vendors other than the 20% with whom they have the highest spend.”

And in analyzing that tail spend, there are many parts of that “tail.”

When we talk about hidden tail, we are referring to the portion or niche where the organization’s largest suppliers exist. These suppliers are usually considered to be—and grouped—within the strategically managed spend, which is most easily characterized as those suppliers given professionally negotiated and monitored contracts that are locked in.

The catchy thing is that some of the company’s spend with large suppliers isn’t always so cut and dry (translation: not covered by contracts). Usually, the reason for this lack of coverage is that the contracts may not always include the specific materials or services being purchased. And while we’re on the subject, another issue may be non-compliant spend with preferred vendors. Thus, that spend can be disguised or hiding.

Head of the Tail

What is referred to as the head of the tail represents a segment where the spend is not strategically managed, even though the spend supplier could be quite a large player (representing upwards of $50,000 to $1 million per annum).

Middle of the Tail

The middle of the tail encompasses company purchases that include a vast amount of various suppliers, each of which may represent $2,000 to $200,000 in spend.

These suppliers are, in essence, considered to be a bit more like small peanuts. Some are larger though, and can be strategically managed.

Tail of Tail or Long Tail

Finally, we have what is known as the tail of the tail, where we group suppliers representing less than $2,000. Unsurprisingly, the spend in this category is all over the place and transactional since the category accounts for a large number of one-off purchases with various suppliers.

The negative—even dangling on the edge of devastating—impacts of tail spend are numerous and far-reaching. The most common consequence affecting companies today is inefficiency due to an influx of varied suppliers and a lack of adequate data visibility.

In a nutshell, the company becomes saturated with too many suppliers, cutting efficiency at its knees. And with all of the purchases occurring among so many different vendors, keeping track (hawklike visibility is the ideal) becomes impossible, which inevitably ends in a waste of funds and deals. It’s a massive blow to the bottom line.

How to Stop Procurement’s 80/20 Problem

Before you get discouraged and throw your hands up in defeat, there are ways you can approach your tail spend to keep your company funds safe and more manageable. When it comes down to it, we see tackling this issue as a two-part plan, which won’t be easy. The hardest part is finding your tail spend and creating visibility into siloed information. And the other part is making a process people will actually use, which, while being no picnic, is definitely doable.

So, take a deep breath, and remember the ever-popular acronym KISS. Keep it simple! Procurement must reduce complexity to be effective. Think about it: none of an organization’s other departments will use a process if it’s too complicated. For this reason, it’s paramount that you clean up your e-procurement solution and make sure the approved vendors and products are up to date and easy to access.

Although managing tail spend is not an easy task and requires discipline, understanding, and diligence, expert studies have shown how tackling tail spend can impact a bottom line. For example, a study from the Hackett Group revealed that organizations can cut annual spend by 5–10 % on average. While this may not seem like a giant sum in percentages, it could mean millions saved when you look at it in dollars.

Taming tail spend can be a surefire solution for significant cost savings for your companies across the globe.  Do you want to be among them? Let us help. Join the Foundry today to get started.

How to Measure the Effectiveness of Your Procurement Team

Buyers: It's time to take back your power. here's how.

Throughout 2022, we wrote and talked about the growing imbalance of power between buyers and sellers in the indirect world, focusing on the gradual...

Management is facing higher expectations than ever before and comes with a job description that requires a multi-faceted work strategy. In the modern...